YOU could appear in GARY GRAHAM’S new MUSIC VIDEO! 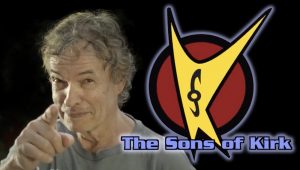 GARY GRAHAM is no stranger to Star Trek and sci-fi…and he’s also been a friend to Trek fan films for over a decade.  Known as Ambassador Soval from Star Trek: Enterprise (he was in an episode of Voyager, too) and Detective Matt Sikes from the TV series Alien Nation, Gary also appeared in the Trek fan films Of Gods and Men, Renegades, and Prelude to Axanar.

But did you know that Gary also has a rock band that plays original songs with Star Trek-themed lyrics?  It’s true!  Heck, he’ll even perform at your wedding or birthday party with his group, THE SONS OF KIRK.  (Seriously, how cool would it be to have a Star Trek veteran actor come to your house and sing Star Trek songs???)

According Gary, “All of [my] insider experiences are infused into the songs and lyrics!  Every single song is Star Trek-themed, with hilarious, cool, and sexy lyrics to make even the most casual fan crack a Vulcan Smile. No filler, No additives; just #NerdCool.”

Gary and his band have just launched a KICKSTARTER campaign with a $5,000 goal.  Their hope is raise enough to record their first studio album and then create a music video for one of the songs.  If they surpass their goal (which is looking likely, as nearly a third of that $5K has been raised in the first 12 hours!), they will have stretch goals for additional songs and potentially more music videos.

Perks include the expected—copies of the finished album, autographed photos, merchandise, listings in the credits at various producer levels—plus a a couple of unique options.  With as little as a $15 donation, your name will be mentioned in a special “Thank You” song (not on the album, but released to the public).  And all contributors of $200 or more get to be in the music video (travel and lodging not included).

To donate, visit their Kickstarter page.